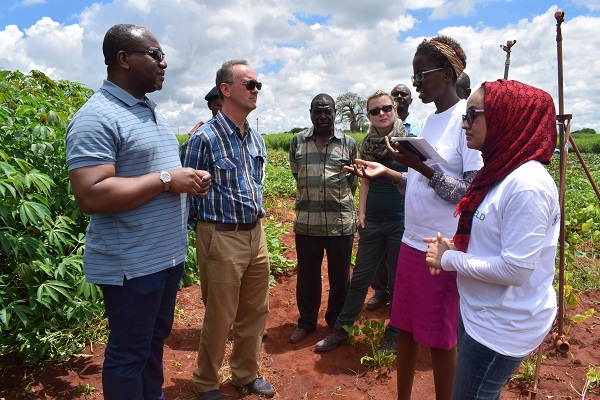 A team comprising of researchers from the Jomo Kenyatta University of Agriculture and Technology (JKUAT) in Kenya, Mikocheni Agricultural Research Institute (MARI) in Tanzania, in collaboration with Basque Institute for Research and Development in Agriculture (NEIKER) in Spain are evaluating and developing cassava cultivars adaptable to the climate change-induced stresses.

The project seeks to develop valuable cassava varieties that are resistant to diseases and able to tolerate different environmental conditions such as heat, cold and drought.

“Project researchers will evaluate cassava varieties in different environments for drought, heat and cold tolerance to identify varieties which are best adapted for those regions,” said Prof. Elijah Ateka of the Department of Horticulture, Faculty of Agriculture at JKUAT who is leading the research team.

He said although cassava is generally considered a hardy crop compared to other cereal crops, the effects of global climate change such as heat, cold, drought/flooding threaten the sustainability of cassava cultivation. Such changes not only affect cultivation but also influence disease epidemics and insect vector outbreaks, all which affect cassava production.

The collaborative research project, funded by Food and Agricultural organization (FAO) as part of achieving sustainable development goals (SDGs) of No poverty, zero hunger and climate action,  supports the co-development as well as technology transfer amongst the three countries.

In Kenya, the project is “evaluating over seventy (70) varieties in Kiboko (Makueni County), Alupe (Busia County) and Kisii (Kisii County) for desired traits. Identified tolerant varieties will be recommended to farmers for cultivation, while the same varieties will be used as parents to breed varieties with combined traits,” Prof. Ateka explains.

The farmers pledged to support the new initiative citing the challenges they have experienced while growing cassava. They are, however, hopeful that the current research trials being undertaken at Kiboko is a positive step towards improving livelihoods and food security in the region.

In East Africa, the main diseases affecting cassava production are cassava mosaic disease, cassava brown streak disease, and cassava bacterial blight, whereas the main insect pest is the whitefly Bemisia tabaci. Given these diseases may cause up to 100 percent loss in yield, it is necessary to identify and develop new cultivars that are resistant or tolerant, states Prof. Ateka.

Globally, climate change is threatening food supply for the ever-increasing population. Shifting weather patterns, unpredictable water supplies, frequent heat waves and decreasing temperatures in some places are some of the effects of climate change that have increasingly made food production difficult. The solutions to chronic food shortages according to researchers, lies in Cassava (Manihot esculenta), a hardy food crop.

Cassava has been identified as an important source of food to more than one-fifth of the world’s population living in Africa, Asia, and South America. The crop plays a particularly important role in developing countries especially in sub-Saharan Africa because it does well in poor soils and with low rainfall.

Since it is a perennial crop, it can be harvested as, and when required. Due to these attributes, cassava has been identified as a crop for promoting food security and is thus included in the National Food Plan.