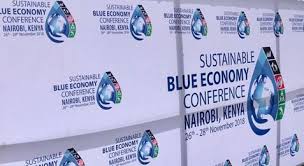 Kenya’s President has said the central government will support counties that border the Indian Ocean, lakes, and rivers to put in place elaborate plans to tap into the promising Blue Economy.

“Investing in the blue economy is a smart move and Kenya is keen to fully realize the potential of its 142,400 square kilometre water body sources,” he said.

In addition, the Lake Region Economic Bloc in Western Kenya that represents the socio-economic aspirations of fourteen counties within the Lake Victoria Basin has similarly prioritized the blue economy as a key economic pillar.

Uhuru said Kenya is committed to leverage on global institutions based in the country such as UNESCO’s Intergovernmental Oceanographic Sub-Commission for Africa and Adjacent Island States, and the Global Sea Level Observation System (GLOSS) to sharpen Kenya’s ocean conservation efforts.

“As a member of the High-Level Panel for a Sustainable Ocean Economy, Kenya commits to achieving 100% sustainable ocean management of areas within its national jurisdiction, guided by Sustainable Ocean Plans, by 2025,” said Uhuru.