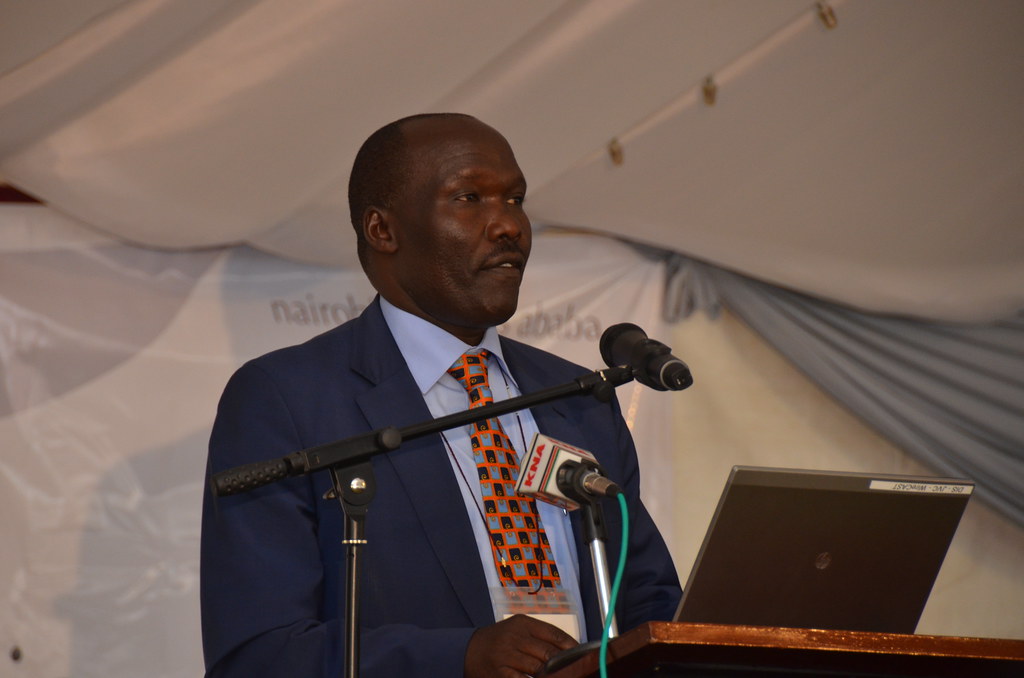 The Principal Secretary, State Department for Irrigation, Prof. Fred Segor has lauded efforts being spearheaded by the National Irrigation Acceleration Platform (NIAP) in advancing knowledge sharing, learning and building synergies to promote and upscale irrigation best practices amongst small-scale farmers in Kenya, thus contributing to the attainment of the Government’s Big Four Agenda.

Addressing policy makers, financial institutions, technology and service providers, private sector, NGOs, CBOs, researchers, farmers and development partners interested in irrigated agriculture during a workshop on: “Partnerships for Scaling up Smart Water Solutions for Irrigation,” Prof. Segor said, the deliberations were important because of the State Department of Irrigation’s involvement in the preparation of the Big Four Agenda, specifically the Food and Nutrition Security pillar.

“Through this Pillar, the Government aims to ensure that the country is firmly set on the path towards realization of 100% food and nutrition security,” said the Principal Secretary.

The workshop, held in Nairobi, Thursday, December 6, 2018, was a convening of stakeholders under the auspices of NIAP, hosted by Jomo Kenyatta University of Agriculture and Technology’s Water Research and Resource Centre (WARREC) in collaboration with SNV Netherlands through the Smart Water Solutions for Agriculture (SWA) Programme.

Prof. Segor stated that the department “was an enabler of the two critical objectives of the Food and Nutrition Security pillar outcomes: increasing the annual maize production from 40 to 67 million (90kg) bags by 2022. Currently, the annual maize consumption in Kenya is 52 million bags; and increasing the annual rice production from 112,800 to 408, 486 metric tonnes by 2022. The current annual rice consumption is 538,370 metric tonnes.”

Prof. Segor told participants that the National Irrigation Board has commenced the innovative Water Storage for Household Irrigation Programme aimed at harvesting rain-water for micro-irrigation at the household level. The programme, according to the Principal Secretary, involves the construction of 1,000 – 3,000 cubic metres capacity water pans of which 2,400 have so far been constructed in 12 counties. “An additional 2,500 such household water pans are expected to have been constructed by December 2018.  Beneficiary farmers will be using the stored water to grow high value crops such as capsicums, carrots, onions and tomatoes.”

He identified the cost and quality improvement of irrigation equipment such as sprinklers and drip kits as some of the key challenges facing the sector and urged NIAP stakeholders to propose ways of improving efficiency and productivity not only for Government-owned national schemes but also for smallholder schemes managed by communities.

With irrigation being the highest consumptive user of water compared to other uses such as domestic water and hydro-power, Prof. Segor called for measures geared towards efficient water use for irrigation.

NIAP Coordinator and WARREC Director, Prof. (Eng.)  Bancy Mati illustrated the centrality of water and irrigation to 12 SDGs related to hunger, poverty, good health, clean water and sanitation, among others.

Prof. Mati said, NIAP provides a vibrant platform for the stakeholders in the irrigated water sector to share knowledge and synergies to advance actions that promote and advocate for irrigation in Kenya, ensuring irrigation is given a voice by a community of practice, enhancing access to technologies and financing by smallholder irrigators, empowering farmers with technical  and business skills, market linkages, mainstreaming new technologies, research and innovation,advocacy and policy push for smallholder irrigation.

According to Prof. Mati, WARREC’s strategic objective “Is to facilitate research, innovation, science and technology in the broad water sector issues and activities, and to strengthen human and institutional capacities of water sector stakeholders in Kenya.”

The Agriculture and Policy Officer, Embassy of the Kingdom of the Netherlands in Kenya, Ms. Rose Makenzie, said “Kenya is yet to attain its full potential of irrigated land,” noting, a large part of agriculture is still rain dependent, according to the 2018 Kenya economic survey report that registered a decline in agricultural production due to the bad weather experienced in 2017.

“The best practices and techniques required to ensure an impactful irrigation sector will get effectively scaled up through partnerships… the added value of working in partnerships can lead to the successful realization of the Big 4 Agenda on food and nutrition security,” she said.

Workshop participants explored the place of public-private partnerships in value chains and policy issues related to access to credit for farmers and made key recommendations that will contribute to streamlining the irrigated agriculture sector including resource mobilization to support the work of NIAP.