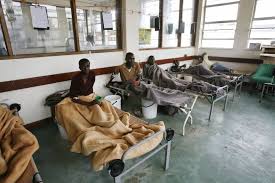 A major typhoid vaccination campaign that uses a new Typhoid Conjugate Vaccine (TCV) begins today in Harare to tackle a drug-resistant outbreak of the disease.

The campaign will be the first in Africa to use the TCV and targets 325,000 people in nine suburbs of Zimbabwe’s capital

“While typhoid vaccines have existed for over a century, previously they could only offer short term protection and couldn’t be used to protect those most vulnerable to this severe disease: young children,” said Dr Seth Berkley, CEO of Gavi, the Vaccine Alliance. “These new conjugate vaccines will be a game-changer, not only in the battle against typhoid but also in the global effort to tackle drug resistance. The fact that they are now ready to be used to contain this devastating outbreak in Zimbabwe is fantastic news.”

This is the second wave of a major typhoid outbreak in Harare which first began in October 2017. This second wave began in September 2018 and has so far resulted in 1,810 cases and two deaths.

Around one in five cases in Harare are estimated to be resistant to the antibiotic ciprofloxacin – the first line of defence against the disease – with an alarming 73% resistance reported in certain areas. With drug-resistant genes circulating, there is a risk that resistance could grow.

Vaccines, though an important part of a broader control strategy, are only a short term solution to typhoid. The best and only long term, sustainable solution is an investment in water and sanitation infrastructure.

When a community has clean water and good sanitation, the spread of typhoid is limited.

In November 2017 the Gavi Board agreed to open a funding window of US$85 million to pay for the rollout of the new Typhoid Conjugate Vaccine. Bharat Biotech International Limited became the first company to have a vaccine prequalified by the WHO in December 2017, following which Gavi began to accept applications from countries for funding. This campaign in Harare is the first to be funded by Gavi. The Zimbabwe government is now working with partners, including Gavi, on a potential future introduction of TCV into its routine immunization schedule.

Both cholera and typhoid are endemic to Harare. Outbreaks of both diseases have been associated with increased use of contaminated boreholes and shallow wells due to municipal water shortages in the city.