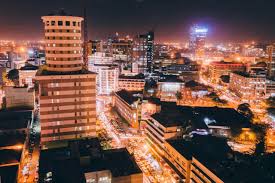 Although Kenya is set to be 50% urbanised by 2030, none of the existing urban centres has an established comprehensive single functional telephone line for rapid response to emergencies. This means a majority of Kenyans are exposed to vagaries of emergencies

According to the Institute of Economic Affairs, the lack of such services exposes residents to disasters which have of late been increasing.

On the positive side, however, John Mutua a researcher from IEA said at the moment 34% of Kenya’s six major urban centres are urbanized, a fact he stated as a good evidence of economic growth.

The report reveals that Nairobi city is at the top rank with a 63 score. This makes it the best place for investors and residents.

According to use of public utilities, Nakuru attributed to having the highest percentage of 89 of household with water supply. The consumption of water is at 0.6m3 at Ksh 28 cheap with a reliability of 17hrs per day.

All the six urban areas have a solid waste management where Nairobi, Mombasa and Eldoret collect waste residue from residents twice per week while the other three centres collect once per week.

In areas of safety and disaster management, the report ranked Nairobi having the least case of crime in 2015 at 1.11 per 1000 which is the biggest drop of 37% attributed in part of its public street lighting plan. It also had the lowest number of recorded accidents of 19 per 1000 against a mean score of 34.

In the health sector, Mombasa had 96 medical personnel per 100,000 popes in 2014 thus relatively high in health deliveries and 81.8% in a health facility. Nairobi and Nakuru have mixed performance.

In social care, Machakos had the best performance of 78 scores on the back of improved social welfare kitty for women and person with disabilities. Similarly, it has the lowest unemployment rate of 9.4% against the average of 12.3% for the six cities.

On matters of trade and investment, the six urban areas have weak overall performance. Although Mombasa was ranked the first due to its provision of information based on investors.

According to the information, it has issued 0.83/1000 people building permits which are the relatively high growth of 10% in the number of business licensed. It also takes only the shortest time of 41 days to register a property.