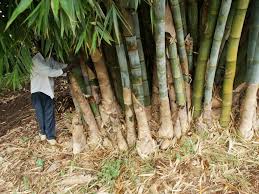 Kenya’s focus on the blue economy is now getting on track with the adoption of the strategy by the department of Kenya Forestry Services Busia County which has chosen to advance the planting of bamboo planting along the River Nzoia bed.

Speaking to Africa Science News reporter at the border county of Busia in Western Kenya, the County Ecosystem Conservator Fredrick Ashiono said Kenya Forestry Services (KFS) in collaboration with riparian communities along River Nzoia are rolling out an Elaborate Bamboo Growing Initiative along the beds of R. Nzoia to stabilize the dykes which previously have occasioned flooding due to their weak and loose soils thus hindering the breeding of fish due to dirty deposits into the lake during floods.

The conservator, however, noted that the initiative along the riparian land will contain the effect of perennial floods allowing clean water pouring into the lake and providing a conducive environment for the breeding of fish in Lake Victoria, especially on Kenyan side hence promoting the blue economy.

Parts of western Kenya has always been prone to perennial flooding which affects families living along the stretch of River Nzoia, which Ashiono now says will be a thing of the past once the project is completed.

Conservationists and environmentalists have argued that bamboo growing along the dykes of River Nzoia will greatly boost fishing activities amongst the riparian communities as there will be more breeding grounds for fish, especially the Tilapia.

However, to realise the success of the project, Kenya Forest Services has partnered with Eco-Green and Kenya Forestry Research Institute (KeFRI) for the sourcing of bamboo seedlings and providing training to the community on bamboo management respectively. Ashiono said they are targeting more than 40,000 seedlings to be planted this season.

However, the project will not only address the blue economy issue but will also boost conservation efforts as well as forest cover. Bamboo also provides an alternative building, smoking materials and other items derived from trees. Busia County accounts for paltry 1percent of forest cover, unlike other areas of western Kenya.

Ashiono passionately called on farmers, youths and women in the region to form groups and embrace bamboo farming to promote livelihoods and called on more partners locally and globally to join the initiative for a cleaner environment that supports human ecosystem.