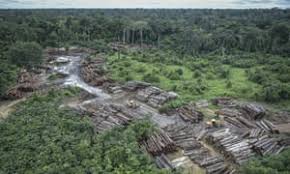 Continued forest destruction is a sure path to crippling weather events, water and air pollution and economic woes, Global climate experts have warned.

The latest climate science offers compelling proof that shifting away from unsustainable food production and consumption approaches built on forest destruction—from knocking down trees to grow palm oil to eating too many cheeseburgers—would keep the planet cool and erratic weather in check, argued top climate and indigenous experts in a briefing held in advance of the release of the Intergovernmental Panel on Climate Change Special Report on Land.

“Clashing visions for the role land might play now and into the future come with a risk of overlooking the critical role of forests,” said Dr Katharine Mach, associate professor and faculty scholar at the University of Miami. She stressed that stabilizing the climate also requires phasing out fossil fuels—in addition to land-based measures.

She added that protecting and restoring forests can be one of the most effective options for storing and removing emissions of heat-trapping gases. Forests, together with lands, already remove a third of the carbon emissions added to the atmosphere each year.

Dr Mach said protecting, restoring and expanding forests and lands could provide an additional 25% of the mitigation needed by 2030 to limit global warming to 1.5 degrees.

Dr Carlos Nobre, a senior climate scientist at the University of São Paolo, added that, in particular, “tropical forests have an extremely important role in addition to storing carbon and removing carbon dioxide from the atmosphere. They cool off the climate; they cool the planet.”

He added that tropical forests also cool off downwind regions; the Amazon, for example, cools central Brazil, one of the country’s breadbaskets.

Charlotte Streck, the founder of Climate Focus, a global think tank said there are action governments and others can take now to end forest loss. This includes the adoption of regulations requiring that all imported agricultural products must be deforestation-free.

Streck added that individuals can take action, too. “If consumption trends continue as projected, the world would need to increase food production by more than 50% and increase crop and prosperous land by about nearly 600 million hectares by 2050.”

UN Special Rapporteur on the Rights of Indigenous Peoples, Victoria Tauli-Corpuz, asserted another solution the Intergovernmental Panel on Climate Change is expected to endorse, for the first time, in the land report is the granting of land rights to indigenous peoples.

“No one knows the conflicts playing out among food, fuel and forests better than indigenous peoples and local communities. We’re often in the cross-hairs of conflicts over land, especially forests. A recent report by Global Witness showed us that indigenous and local people continue to face murder and criminalization when we stand up to the agro-industry, mining, logging and infrastructure projects that threaten our forests, our lives and the animals and plants we protect,” said Tauli-Corpuz.

“And no one understands the value of forests better than indigenous and local communities,” she continued. “As experts, often guided by hundreds of years of knowledge, we are uniquely suited to manage, protect and restore the world’s forests.”

She emphasized that a growing body of research has shown that the forests managed by indigenous peoples and local communities have lower deforestation rates, higher carbon storage and higher levels of biodiversity than found in government-protected areas.