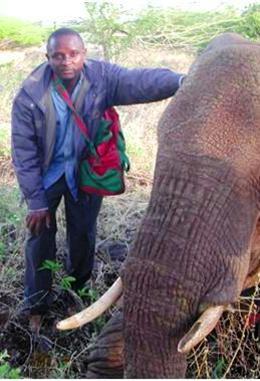 Kenya Wildlife Service with support from various partners will next week conduct the Tsavo-Mkomazi elephant aerial survey.
The first three days of the census taking place between February12-24, 2017 will be dedicated to intensive training and induction of participants.
The Elephant aerial census in Kenya has been carried out systematically every three years. The last census for the Tsavo-Mkomazi ecosystem was carried out in 2014. Tsavo-Mkomazi is located in the south east of Kenya and North east of Tanzania with coordinates lying between 2–4°S, and 37.5– 39.5ºE, covering an area of 48,656 km2.
The specific objective of the census is to establish the current elephant and other large mammals’ population size and distribution, and compare these results with the results of past aerial counts, to determine the number and distribution of elephants.
The census also seeks to understand the distribution of elephants and other large mammals in relation to the distribution of water sources, to map human activities inside and outside the protected areas (e.g. logging, settlements, farming, and charcoal burning), to document the distribution and numbers of livestock in relation to elephants and other large mammals in the ecosystem and to interpret the information obtained and deduce sound management decisions for the continued existence of wildlife in this fragile ecosystem.
By documenting findings from the exercise, KWS and other conservation stakeholders can put in place informed security and conservation oriented strategies to enhance species protection, develop strategies to reduce human wildlife conflict. The results will also inform anti-poaching security operations within the species range and secure critical wildlife areas to enhance the species conservation.
The census will be conducted by a multidisciplinary team of participants that include: pilots, scientists and research assistants drawn from conservation organizations using fixed winged aircrafts. The team of about 120 participants will be stationed in different camps in the Tsavo Conservation Area within the census area.
Aerial count of large mammals in Tsavo ecosystem has been carried out since the 1960s. These counts have provided vital information to policy makers and park managers, facilitating sound management of elephants in the ecosystem. Habitat loss due to compression of the elephant population emanating from sedentary settlements around major migratory corridors and former elephant range is a key elephant conservation and management issue in the Tsavos. Human-elephant conflict is the greatest problem associated with loss of elephant range as a result of increasing settlements in formerly unsettled areas. Communities surrounding protected areas in the Tsavo ecosystem practice crop farming, therefore competing for land with wildlife. The area is home to many other wildlife species and is an important tourist destination famed for the presence of the popular ‘Big Five’.
The area hosts a third of the elephant population in Kenya. It is therefore important to continue to monitor the population of elephants and other mammals as well as impacts of elephant poaching in the ecosystem to provide the long term data required by park managers and policy makers to make decisions necessary for sound management of this vital and fragile ecosystem.
Representatives from wildlife research and wildlife authorities from Tanzania, Uganda and South Sudan are expected to witness the exercise.
Key institutions and organisations working in Kenya expected to participate in the exercise mainly funded by United States Agency for International Development (USAID) and who have also provided resources are: International Fund for Animal Welfare (IFAW), David Sheldrick Wildlife Trust (DWST), African Wildlife Foundation (AWF), World Wildlife Fund Kenya(WWF-K), Save the Elephants, Tsavo Trust and local community ranches, among others.