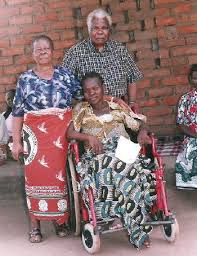 Africans are more likely to live with disabilities caused by non-communicable diseases (NCDs) in their later years than any other health problem, a new joint report by the HelpAge International and AARP reveals.

According to Global AgeWatch Insights, studies from around the world show that NCDs, like Cancers, diabetes, cardiovascular diseases (like heart attacks and stroke) among others, are the predominant driver of disability across the life course, accounting for three-quarters of all years lived with disability.

“The report is coming out at a time when countries such as Kenya have launched the universal health coverage,” said Dr Prafulla Mishra, Regional Director, HelpAge International. He adds that Adding that the need for data on health needs amongst persons over age 50 cannot be gainsaid. “The reality in most African countries, older persons have been overlooked and ignored in the global health agendas,” said Dr Prafulla.

Launched globally on 12 December, Universal Health Coverage Day, the publication focuses on older people’s right to health, and how health systems need to adapt to ensure older women and men can realise their right to health. In addition to the global analysis, the report explores national trends on older people’s health status in 12 countries, including Tanzania, Zimbabwe and Kenya.

In Tanzania, the report reveals that while the disability burdens related to communicable diseases decreased from 1990 to 2015, those related to NCDs increased across all age groups in the same period. In 2015, NCDs accounted for 60% of deaths among men and women aged 50-69, and 67% of those aged 70 and over.

Similar trends are seen in Kenya, where non-communicable diseases accounted for 75% of the total years lived with disability.

Global AgeWatch Insights is a consultatively researched global publication part of whose work is informed by extensive joint research conducted in Kenya, Zimbabwe and Tanzania. It presents findings of older people’s right to health in the context of current demographic, epidemiological and health systems transitions.

The report explores how universal health coverage (UHC) and the Agenda 2030 for Sustainable Development can help to realise older people’s right to health. It considers how health systems can respond to shifting disease patterns, and ensure the availability, accessibility and quality of health services for older people.

In 2018, for the first time in human history, the global population of people aged 60 and over surpassed one billion. The number of older people continues to rise in almost all countries around the world, contributing to a shifting pattern of disease and different demands being placed on health systems.

The report highlights the systematic lack of data there is on older people’s access to health or their health issues, which means there is insufficient evidence to effectively inform the planning and delivery of health systems. As governments globally push for universal health coverage, older people risk being left behind unless these data gaps can be filled.

Of the 41 million annual deaths caused by NCDs globally, 32 million occur in low and middle-income countries. Despite this, many countries do not include older people in their data collection. For example, 34 of 40 countries in Africa that have conducted a World Health Organization (WHO) survey on NCDs have not included anyone over the age of 64.

The report also explores differences between men and women. Although women are living longer, the report shows they live 9.4 years in poor health, compared to 7.8 for men. Among people aged 70 and over in each of the 12 profile countries in 2016, dementia causes more years lived with disability in women than men. Similarly, depression causes 4.4% of years lived with disability in women compared to 3% in men.

The report calls for universal health coverage for all at all ages and improved access to services including prevention, diagnosis and treatment of disease among older men and women to realise their right to health.

Justin Derbyshire, Chief Executive Officer of HelpAge International, said: “This year, as we celebrate the 70th anniversaries of the Universal Declaration of Human Rights and the founding of the World Health Organization, it is significant that older people are being left behind. Older people have the right to health, but they are not being counted in key data, and health services are not being adapted to meet their needs.

“Health systems in low and middle-income countries are facing severe challenges, but the global drive towards universal health coverage is an opportunity to strengthen these and meet the commitment of the Sustainable Development Goals to ensure healthy lives and wellbeing for all at all ages.”