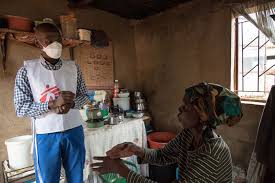 With the new Global Plan, the Stop TB Partnership is also launching the largest ever call for proposals, 2.5 million USD, to fund grassroot organizations as part of the TB response as well as new, child-friendly drug-resistant TB treatments.

In September 2018, Heads of State and Government assembled at the United Nations committed to a series of bold targets in the fight against TB. Unlike previous five-yearly plans, the updated Global Plan for 2018-2022 is deliberately aligned to the time frame of the UN High-Level Meeting (UNHLM) on TB targets and provides an estimate of the resources needed to achieve these targets.

If the Global Plan is fully funded and implemented, countries will reach UNHLM on TB treatment targets set for 2022, including putting 40 million people on treatment for TB, including 3.5 million children and 1.5 million people with drug-resistant TB. This will lead to 1.5 million fewer deaths due to TB, and the return on investment will be 44 USD for 1 USD spent. On the other hand, a five-year delay in increasing funding for TB research and development would lead to approximately 2 million more people dying and an additional 13.9 million people developing TB.

The announcement was made in Indonesia, one of the top three highest TB burden countries in the world, with nearly one million people developing the disease each year. In its 2016 National Strategic Plan, the Indonesian Ministry of Health pledged to end TB in the country by 2030.

At the event, Stop TB’s Global Drug Facility (GDF) officially launched the Pediatric Drug-Resistant TB (DR-TB) Initiative. Of the estimated 1.1 million children under the age of 15 who became sick with TB around the world in 2018, an estimated 32,000 had DR-TB. Of those, fewer than 5% are diagnosed and receive treatment. Even fewer of those under the age of five received treatment.

Until recently, only 500 young children globally with DR-TB received treatment, and those who were treated were put on medicines intended for use in adults. Yet, children require different formulations for treatment than adults—ones that are more aligned with the smaller size of children and that can be taken more easily, for example dispersed in water rather than crushed and mixed. With so few children with DR-TB being diagnosed and treated globally, getting these new formulations developed, produced and distributed is difficult.

The Pediatric Drug-Resistant TB Initiative aims to ensure access to the best possible treatments for children suffering from one of the deadliest diseases in the world. GDF together with the Sentinel Project on Pediatric DR-Tuberculosis worked to identify early adopter countries that could implement the new pediatric formulations quickly and pooled their demand, leading to the introduction of these life-saving medicines in countries in less than 12 months.

Already procured by 56 countries and introduced in Haiti and Nigeria, among others, the oral medicines come in a dissolvable, flavored form—replacing the adult doses in tablet form that had to be crushed or split so that the proper therapeutic levels could be met and removing the injectables with their terrible and permanent side effects. GDF was also able to negotiate substantial price reductions, ranging from 30% to 85%, depending on the medicines used.

In 2019 alone, Stop TB’s GDF provided over 1,100 treatments for children with drug-resistant TB around the world, more than double the number of children under five years of age historically treated each year for DR-TB.

However, the world is far away from the 2018 UNHLM on TB and Global Plan to end TB target of treating 115,000 children with DR-TB by the year 2022, including 47,000 young children in need of these new, child-friendly formulations.

An estimated 30% of the 10 million people who developed TB disease in 2018 did not access or receive proper care. This call for proposals recognizes the fact that we cannot reach these key and vulnerable populations unless we work with TB-affected communities and the organizations that support them. Only through collaboration with these organizations can we end TB.

Supported by USAID and the Global Fund to Fight AIDS, Tuberculosis, and Malaria, each grant will be between 25,000 and 150,000 USD to cover 12 months of activities.

The Challenge Facility for Civil Society grant mechanism will fund proposals that address barriers in screening and treatment services; promote community outreach, education and advocacy; organize legal responses to systemic discrimination; and facilitate monitoring of the TB response, holding governments accountable to the commitments made in the United Nations declaration on TB.

In 2018, ten million people fell ill from TB and 1.5 million people died from the disease, taking a huge toll on human and economic health in countries worldwide. Roughly 30% of the new infections went undetected and unmonitored, however, and the TB epidemic will never be fully controlled until all infections are tracked and treated.