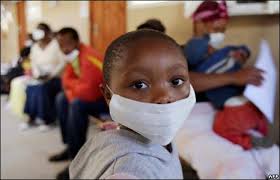 Southern Africa is a region that has witnessed the highest annual declines in new cases of tuberculosis, a new WHO’s 2018 Global TB Report, released in New York Tuesday shows.

Countries such as Lesotho, Eswatini, Namibia, South Africa, Zambia, and Zimbabwe are experiencing reduction rates that range between 4-8%, thanks to better TB and HIV prevention and care. Only around half of the estimated 920,000 people with HIV-associated TB were reported in 2017.  Of these, 84% were on antiretroviral therapy.

“It is unacceptable that millions lose their lives, and many more suffer daily from this preventable and curable disease,” said Dr Tereza Kasaeva, Director of WHO’s Global TB Programme.  “We need to join forces to root out this disease that has a devastating social and economic impact on those who are “left behind”, whose human rights and dignity are limited, and who struggle to access care. The time for action is now.”

The Global TB Report, released in New York today, calls for an unprecedented mobilization of national and international commitments. It urges political leaders gathering next week for the first-ever United Nations High-level Meeting on TB to take decisive action, building on recent moves by the leaders of India, the Russian Federation, Rwanda, and South Africa. Nearly 50 Heads of State and Government are expected to attend the meeting.

“We have never seen such high-level political attention and understanding of what the world needs to do to end TB and drug-resistant TB, said Dr.Tedros Adhanom Ghebreyesus, WHO Director-General.   “We must capitalize on this new momentum and act together to end this terrible disease.”

Drug-resistant TB remains a global public health crisis: In 2017, 558 000 people were estimated to have developed disease resistant to at least rifampicin – the most effective first-line TB drug. The vast majority of these people had multidrug-resistant TB (MDR-TB), that is, combined resistance to rifampicin and isoniazid (another key first-line TB medicine).

In addition, underreporting and under-diagnosis of TB cases are other major challenges. Of the 10 million people who fell ill with TB in 2017, only 6.4 million were officially recorded by national reporting systems, leaving 3.6 million people undiagnosed, or detected but not reported.  Ten countries accounted for 80% of this gap, with India, Indonesia and Nigeria topping the list. Less than half of the estimated one million children with TB were reported in 2017, making it a much higher gap in detection than that in adults.

Treatment coverage lags behind at 64% and must increase to at least 90% by 2025 to meet the TB targets. To urgently improve detection, diagnosis and treatment rates, WHO, the Stop TB Partnership and the Global Fund launched the new initiative in 2018, Find. Treat. All. #EndTB (www. http://www.who.int/tb/joint-initiative/en/ ), which set the target of providing quality care to 40 million people with TB from 2018 to 2022.

Only one in four people with MDR-TB were reported to have received treatment with a second-line regimen. China and India alone were home to 40% of patients requiring treatment for MDR-TB, but not reported to be receiving it.

Globally, MDR-TB treatment success remains low at 55%, often due to drug toxicity making it impossible for patients to stay on treatment. A month ago, WHO issued a Rapid Communication on key changes to the treatment of drug-resistant TB based on the latest scientific evidence. These changes should result in better treatment outcomes and more lives saved. WHO is already working with countries and partners to roll out these changes.

To meet the global target of ending TB by 2030, countries need to urgently accelerate their response – including by increasing domestic and international funding to fight the disease. The WHO report provides an overview of the status of the epidemic and the challenges and opportunities countries face in responding to it.

WHO is guiding national and global actions to reach everyone with care, including those with TB, through a transformative health agenda and push towards Universal Health Coverage. This includes proactive engagement with civil society and other key stakeholders to jointly help countries get on track to end TB.

Next week’s UN High-Level Meeting comes at a critical time. Ending the TB epidemic requires action beyond the health sector to address the risk factors and determinants of the disease. Commitments at the level of Heads of State will be essential to galvanize multi-sectoral action.

“We must make sure that this report and the commitments we hear next week from country leaders at the High-Level Meeting on TB translate into action,” said Dr Eric Goosby, UN Special Envoy on TB.  “Equally important, we must ensure that we hold our leaders accountable for the actions they promise to take.  And we must hold ourselves accountable for keeping the pressure on.”

One of the most urgent challenges is to scale up funding. In 2018, investments in TB prevention and care in low- and middle-income countries fell US$3.5 billion short of what is needed. The report flags that without an increase in funding, the annual gap will widen to US$ 5.4 billion in 2020 and to at least US$ 6.1 billion in 2022.  A further US$ 1.3 billion per year is required to accelerate the development of new vaccines, diagnostics and medicines.